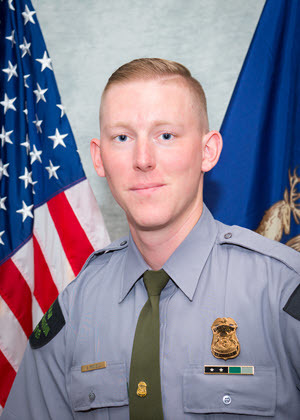 A Michigan Department of Natural Resources conservation officer used a tourniquet to stop blood loss from a 22-year-old Scottville man, who is recovering in an area hospital from an accidental, self-inflicted gunshot wound.

The shooting occurred Sunday morning on U.S. Forest Service-managed land that is available for target shooting, east of Manistee in Manistee County.

Conservation Officer Scott MacNeill - the first emergency responder on scene, spoke with the thankful man on Monday morning. To respect the man's medical privacy, the DNR is not releasing his name.

According to MacNeill, the man told him: "Your tourniquet saved my life. If I had to wait for EMS I don't know what I would have done."

The man used his cellphone to call 911 after he accidentally discharged a bullet from his .40 caliber Smith and Wesson Bodyguard pistol into his left leg. Manistee County Sheriff's Office deputies received the initial call and communicated the incident to local emergency responders at 11:49 a.m.

Three minutes later, MacNeill arrived at the federal shooting area located east of Manistee in Norman Township, on the west side of Udell Hills Road, south of Steinberg Road.

MacNeill located the man alone, sitting in the driver's seat of a pickup truck surrounded by blood. The man displayed initial symptoms of shock and was plugging the wound with his finger to slow the blood loss from his swollen and discolored leg.

Evaluating where the bullet entered the leg, MacNeill could not locate an exit wound and suspected the man had possible arterial bleeding under the skin that was filling his lower leg with blood.

MacNeill applied his department-issued tourniquet to the man's thigh, which immediately slowed the loss of blood. Once the tourniquet was secure, MacNeill advised the man to remove his finger from the wound, which had successfully stopped bleeding.

While waiting for additional medical assistance to arrive, MacNeill continued caring for the man who was now in shock. MacNeill kept the man stabilized in an upright position, while he established a calm conversation.

The man told MacNeill that after he loaded the firearm at the rear of his truck, he put the firearm in the front, left pocket of his shorts, at which point, the firearm discharged.

At noon, Norman Township Fire and EMS personnel arrived on the scene and transported the man to Munson Medical Center in Traverse City. North Flight EMS also responded to the scene.

Per the man's request, MacNeill unloaded, cased and safely stowed the firearm, secured the vehicle, and returned the keys to the man, who asked a relative to drive his vehicle home.

"We are thankful to hear that as of this morning, a young man is recovering in the hospital after an accidental gunshot wound," said Chief Gary Hagler, DNR Law Enforcement Division. "Conservation Officer Scott MacNeill was patrolling nearby and immediately responded to the federal property where he delivered lifesaving first-aid and established a calm and trusting rapport with the man. This is a strong reminder to always practice the highest level of firearm safety."

MacNeill has been a conservation officer since 2016 and patrols Manistee County.

MacNeill: On Sunday, Michigan Department of Natural Resources Conservation Officer Scott MacNeill used a tourniquet to stop bleeding from the thigh of a 22-year-old Mason County man, who suffered an accidental, self-inflicted gunshot wound. MacNeill spoke with the thankful man on Monday morning, who is recovering in a nearby hospital. MacNeill has been a conservation officer since 2016 and patrols Manistee County./