In 1919, on a beautiful day in May, soldiers of Michigan’s 32nd Infantry Division marched through the streets of Detroit celebrating their homecoming from World War I.

The division served in the fighting in France and was memorialized by the French army with the nickname, “Les Terribles,” in honor of its ferocity in combat.

“In each successive battle, its fighting was better and its morale improved,” said Major-General William G. Haan, combat commander of the 32nd Division, in a May 6, 1919 news article on the front page of the Detroit Free Press. “It actually fought in the hardest of battles 35 days and as many nights, and smashed through the enemy lines for a distance of more than 25 miles and never gave away an inch.

“It successfully defeated 33 German divisions, not a few of which were rated among the best. From the famous 28th German division, known as ‘The Kaiser’s Own’ after three days’ hard fighting it took more than 400 prisoners and drove it from the field a broken organization.”

One French newspaper praised the performance of the divisions’ soldiers. After only a brief training period they, “made a magnificent showing when under fire…neither the French, who fought beside them, nor the enemy, whom they hurled aside, will dispute their right to the title of ‘terrible.’”

Another French reporter described the dangers the Michigan troops faced in combat, saying, “One can scarcely imagine the difficulties of the fighting in this country…with deep valleys…and honeycombed with holes making admirable machine gun shelters. These machine guns literally rain bullets.”

The reporter then illustrated the horrors of the poison gas used by the Germans, writing, “One does not die from effects of this gas, but one is so suffocated or burned that it is humanly impossible to hold the line, and unfortunately the (gas) mask is not an absolute protection.”

Now back at home, the men of the 32nd proudly marched behind their flags — a pair of banners, one resembling the stars and stripes, the other bearing the national crest with an eagle holding a bundle of arrows and an olive branch.

Each flag was emblazoned with the regiment’s number. These flags, and others, are currently on display at the Michigan History Center in Lansing, a division of the Michigan Department of Natural Resources. 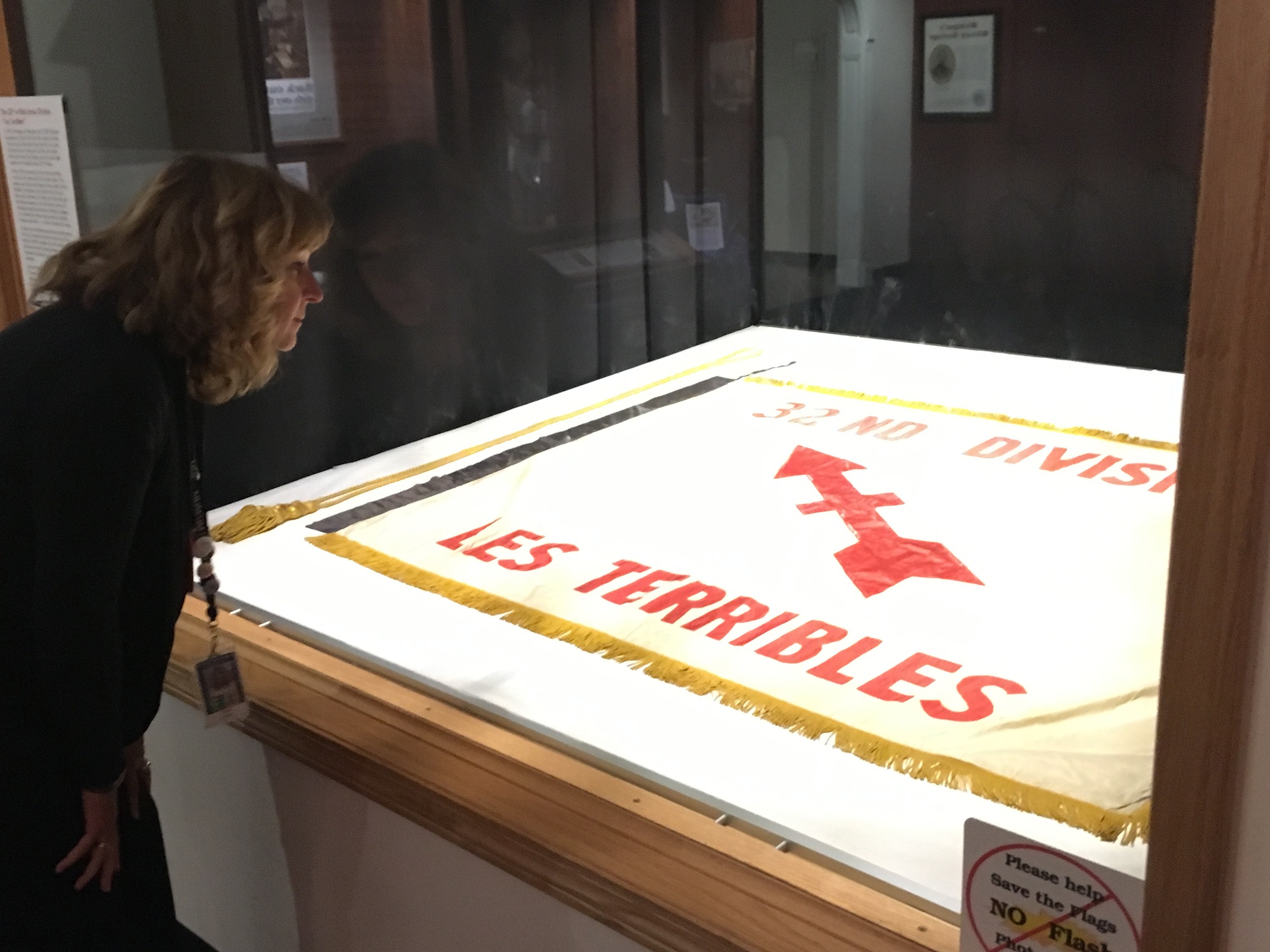 “The young men of the division are coming home strong and clean, smiling and happy, ready to re-enter into competition in civil pursuits,” Haan said. “They ask for no charity. They know there is awaiting them a square deal in a fair field in God’s own country, the beauty and glory of which they have learned to appreciate.”

Although Michigan’s World War I soldiers did not carry their regimental flags into battle, as their Civil War predecessors did, their flags were important symbols representing each regiment’s shared sacrifice and heroism.

According to a post-war memo from Michigan’s adjutant general, 186,000 Michigan soldiers served in “The Great War,” with 4,552 casualties.

During the Civil War, soldiers started painting the names of important battles onto their flags. First World War flags bear the battle honors of their regiments in the form of streamers attached to the tops of the staffs.

“This is similar to today’s military flags,” said Eric Perkins, historian with the Michigan History Center. “These flags become much more than simple symbols of patriotism to soldiers. You can literally read their history on the flags.”

Before they left France, the 32nd Division soldiers attended a victory ceremony where over 200 men were presented the Croix de Guerre for bravery by their former French commander, General Mangin. Mangin also pinned medals on the division’s flags.

"I am very happy to be among you once more, and proud that this meeting of ours is taking place on the other side of the Rhine,” he said. “The occasion of this reunion is to bestow upon you a few decorations, meager tokens of the gratitude which the French Republic, the People of France, and the soldiers feel towards you, for the brilliant conduct and splendid courage you displayed…which will place in history the glorious deeds of the 32nd Division.” 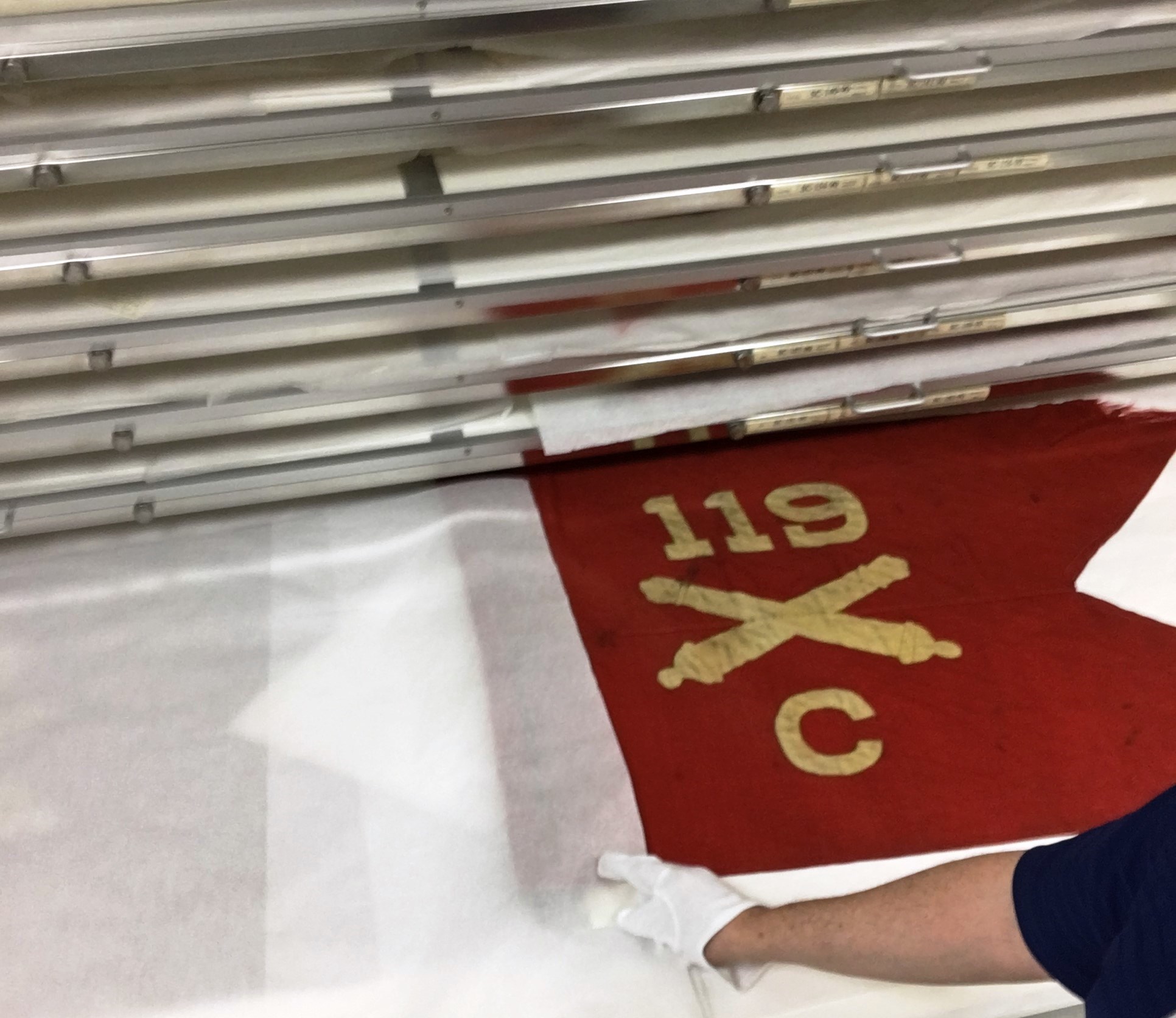 From now until January 2018, a selection of Michigan’s World War I flags are on public display at the center.

The Michigan Battle Flag collection contains 56 flags from World War I and another 184 flags from the Civil War and Spanish-American War.

Michigan’s flag collection was started more than 150 years ago when Civil War veterans turned many of their battle flags over to the state in a July 4, 1866 ceremony the Free Press called “The Grandest Celebration Ever Witnessed in Detroit.”

“Of the impressive and unwonted scene presented, when the color-bearers of the three score and ten organizations which the Peninsular State sent to the field stood before the assembled authorities of the State, supported by their comrades in arms and surrounded by the thousands of their fellow citizens, holding those torn and smoke-grimed battle flags in their hands, no true or faithful picture can be given,” the newspaper said.

“There are lights and shades, and strong and tender feelings and memories, stirred which no words can tell or pencil portray. Rough, stalwart, sturdy men were there, just from the fields and workshops where they have employed themselves in the arts of peace since, a year ago, they laid their arms down and returned to home and its endearments.”

The paper continued to describe the scene.

“There were others worn and thin and wounded, scars marked their limbs and bodies, and not a few there were whose ‘empty sleeve’ hung limp and lifeless as did once the arm that fell shattered by shell or bullet; and some of these proudly bore the tattered banners in their remaining hand.

“Here too, were grouped in a single line banners and heroes from every regiment and organizations which bore them in the field. Here under the same ‘old flag’ that waved over them in the field, the trenches and the deadly breach, what memories returned and what scenes and battles were gone through again, what campfires brightened to the vision of weary, toiling, foot-sore and hungry men.” 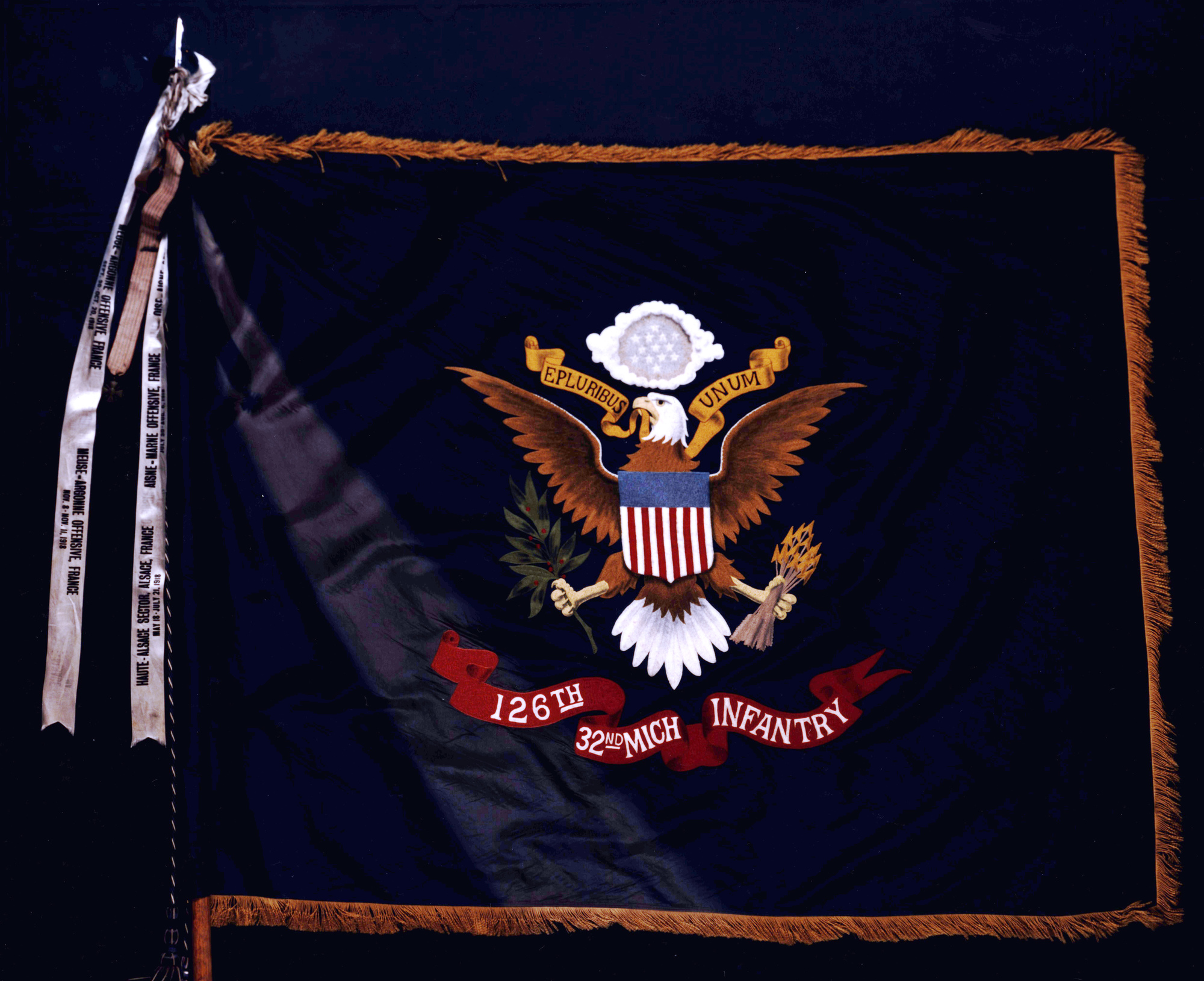 From April 1861 to April 1865, Michigan furnished 90,747 men to the Civil War, not counting 1,982 men commuting and 4,000 Michigan men who served in the units of other states, according to the Michigan Department of Military and Veterans Affairs.

In accepting the flags, Michigan’s Governor Henry Crapo pledged that, “They will not be forgotten and their histories left unwritten. Let us tenderly deposit them, as sacred relics, in the archives of our state, there to stand forever, her proudest possession.”

Following the dedication of the new Capitol in Lansing in 1879, the flags were placed, first in a military museum on the first floor, then, in 1909, moved to the Capitol's rotunda.

The flags remained there until the restoration of the Capitol from 1989-1992. At that time, an alarming discovery was made — the flags were deteriorating from the effects of constant exposure to light, fluctuating temperature, humidity and gravity.

“What years of battle damage could not do to the flags was actually being accomplished by these hidden enemies,” said Matt VanAcker, director of Capitol tours for the state of Michigan and co-chairman of Save the Flags. “The flags were removed from the Capitol and placed in a specially-designed archival storage unit in the Michigan History Center.” 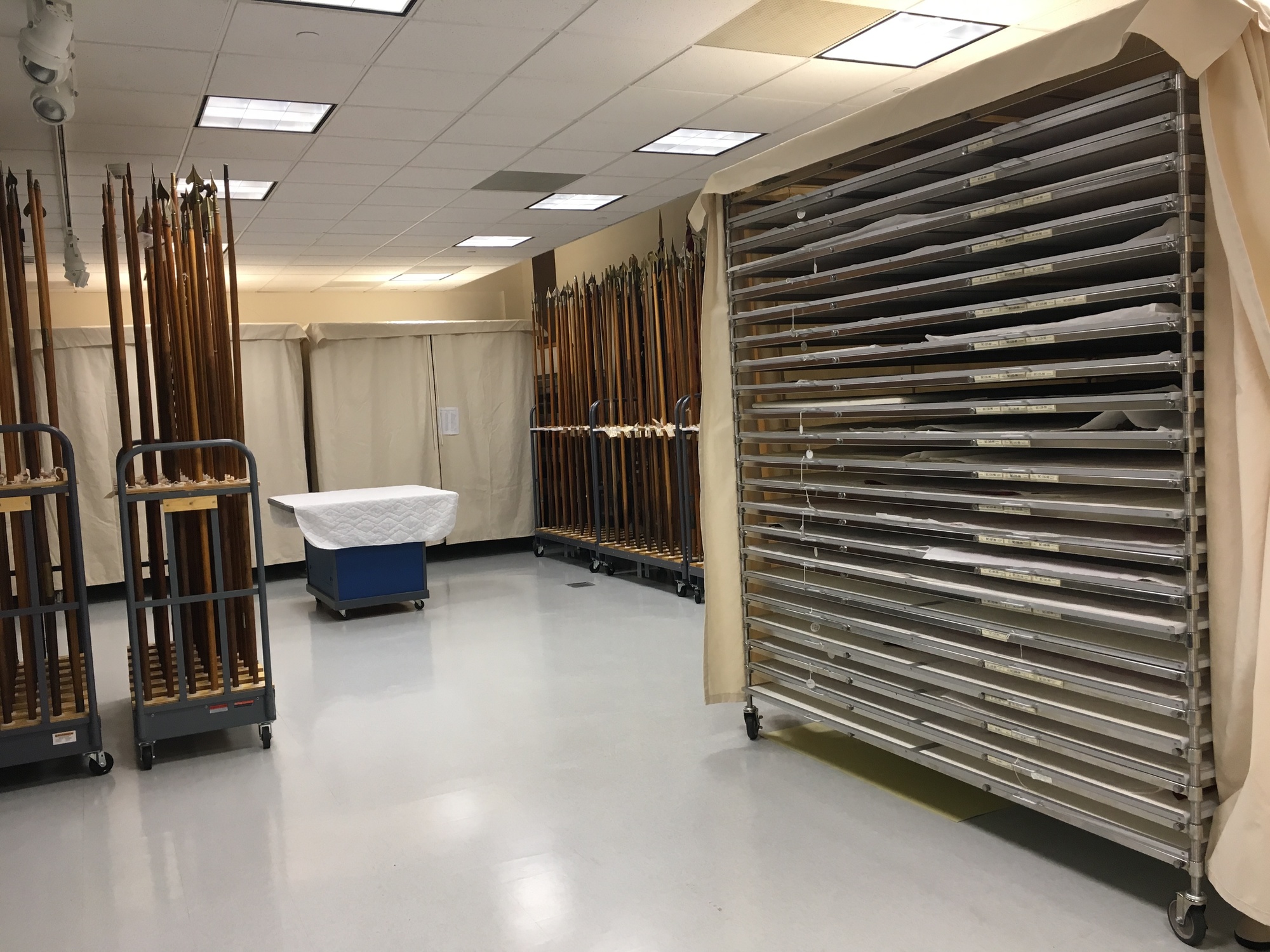 According to VanAcker, “One of the greatest successes of Save The Flags, our project to preserve, research and display 240 battle flags carried by Michigan soldiers in the Civil War, the Spanish American War and World War I, has been its ‘adoption’ program.”

For a donation of $1,000 individuals, organizations, schools, families and communities can help with the preservation, research and display of the flags by “adopting” flags in the collection. To date, almost 150 flags — mostly from the Civil War — have been adopted, providing the project with much-needed funds.

With controlled climate and lighting and special acid-free storage racks, the flags are being preserved from further deterioration.

Flags from the 32nd Division and other military units like the 339th “Polar Bears” Regiment, whose members served in northern Russia, are being exhibited, one at a time, in a special viewing window.

Revisiting the state’s military flags, and preserving them properly for tomorrow, allows Michigan residents to connect visually with the past, adding depth and color to their appreciation of wars that gripped our nation and greatly changed Michigan and the country.

The Michigan History Museum is located in the east wing of the Michigan Library and Historical Center, on the north side of Kalamazoo Street, two blocks east of M. L. King Jr. Boulevard in Lansing.

For more information, call 517-373 3559 or visit the museum webpage at Michigan.gov/Museum.

Check out previous Showcasing the DNR stories and subscribe to upcoming articles.

Parade: The 32nd Division marching in the Detroit parade upon its return from World War I. (Photo courtesy of Walter P. Reuther Library, Archives of Labor and Urban Affairs, Wayne State University).

Protection: All the historic flags at the Michigan History Center in Lansing lie flat and are covered with acid–free tissue. Historian Eric Perkins examines a flag from the 119th Field Artillery Regiment.

Storage: Michigan’s battle flag collection is stored on special racks with acid-free pallets and special foam fittings to protect them at the Michigan History Center in Lansing.

Visitor: A museum visitor studies a World War I flag of the 32nd Division, now on display on the first floor of the Michigan History Center in Lansing.