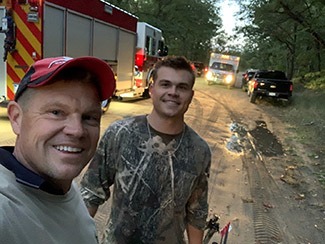 But Miskovich credits two Ravenna men – Brett Postema, 25, and his father, Michael Postema, 50 – for the rescue.

The woman, whose name was not released, became lost after she went for a walk Tuesday night, fell down a hill and was unable to find her way out of the woods. She had been reported missing earlier in the day Thursday.

“Within 90 minutes of arriving on scene, Conservation Officer Miskovich, with the help of two local men, located this missing woman who spent two nights in the woods, experiencing hypothermia from rain and cold temperatures,” said Chief Gary Hagler, DNR Law Enforcement Division. “I’m happy she was rescued before the situation became worse. Thank you, Michael and Brett Postema – you went above and beyond to help. Your instincts and knowledge of the area helped save a woman’s life.”

Brett Postema had been walking to a hunting spot in the Muskegon State Game Area Thursday when he thought he heard someone cry, “help me.”

Postema called a friend, who could also hear the calls for help in the background.

After calling 911, he headed back to the road where he told his story to an officer. Postema felt uneasy after reporting the incident and drove to his father’s house to explain what happened.

“I don’t have a good feeling about it,” Brett told his father. “We need to go back out there. If this was my sister stuck in the woods, I’d want someone to go back for her.” 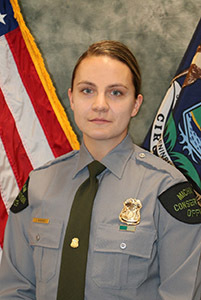 Meanwhile, at about 5:30 p.m., Miskovich had received the call and met other emergency responders on N. Hilton Park Road, located north of White Road.

She and Muskegon County Sheriff’s Deputy Ed Vanas searched the area. They yelled into the woods, but nobody called back to them.

The Postemas drove back to the game area and returned to the ridge along the swamp where Brett had originally heard the voice. After about 10 minutes of shouting, both men heard the woman cry for help.

They called 911. Brett began running back into the woods to meet the officers, while Michael, up to his chest in the swamp, attempted to reach the woman.

After receiving the 911 call, Miskovich ran into the woods, down a steep hill towards the marsh, where she encountered Michael. Using the woman’s voice to guide them, Miskovich and Postema walked about 500-600 feet into the thick marsh and found the woman at the base of a tree.

She was alert and displaying signs of hypothermia. The woman said she had been, “stranded for days,” hurt her ankle and was unable to find her way out of the woods.

Miskovich and Michael carried the woman through the marsh, to the base of the hill, where they met fire and EMS personnel who put the woman in a rescue basket. They pulled her up the hill to an all-terrain emergency vehicle that drove her the remaining quarter-mile out of the woods. ProMed Ambulance transported the woman to the hospital.

“If it weren’t for Brett trusting his instinct, going back into the woods and contacting 911 a second time, I don’t know if we would have been able to find her,” Miskovich said.

Accompanying photos are available below for download. Caption information follows.

Miskovich: Michigan Department of Natural Resources Conservation Officer Jackie Miskovich has been with the DNR Law Enforcement Division since July 2018 and patrols in Muskegon County.

Postema-Michael-Brett: Michael Postema, 50, and Brett Postema, 25, from Ravenna, contacted 911 and helped locate a missing Muskegon woman on Thursday. Brett heard the woman crying for help while he was walking through the Muskegon State Game Area to go bow hunting. (Photo courtesy of Michael Postema)